In the early hours of January 3rd, near a Baghdad international airport, Iranian Major General Qasem Soleimani was killed in an American drone strike. A highly important figure in Iran, Soleimani was the leader of the Quds Force of the Islamic Revolutionary Guard Corps where he was responsible for overseeing military intelligence operations overseas.1

According to the Department of Defense in a statement issued shortly thereafter, “General Soleimani was actively developing plans to attack American diplomats and service members in Iraq and throughout the region. General Soleimani and his Quds Force were responsible for the deaths of hundreds of American and coalition service members and the wounding of thousands more.”2

After the airstrike, Iran promised swift retaliation and the collective world held its breath.

Before we knew it, imaginations ran a bit too wild and the term “World War 3” was trending on the internet. Concern reached such a fever pitch that the Selective Services System website crashed over worries of the reimplementation of a national draft, something our country hasn’t seen since the Vietnam War in 1973.3

But let’s take a step back.

Not long-ago North Korea and Kim Jong Un held the nation’s attention as the most prominent threat. Or was in Russia? Or some other country? It seems in the age of the 24-hour news cycle, there is always some new imminent threat vying for our attention. With the growing interconnectedness of the world, countries may be thousands of miles away but at the same time feel right at our doorstep. Globalization brings us much closer together in ways that are not always pleasant and can often lead to conflict.

How Do Conflicts Around the World Affect Our Investments?

In the world of investing, fear and greed are often the fuel that drives the market – at least in the short term. Fear can lead to more pronounced volatility, leading to more fear, leading to declines in the market – a negative feedback loop that can cause the value of our precious retirement accounts to fall. But how do geopolitical events such as the dispute between the United States and Iran really affect the stock market? To take a deeper look, the chart below helps answer this important question: 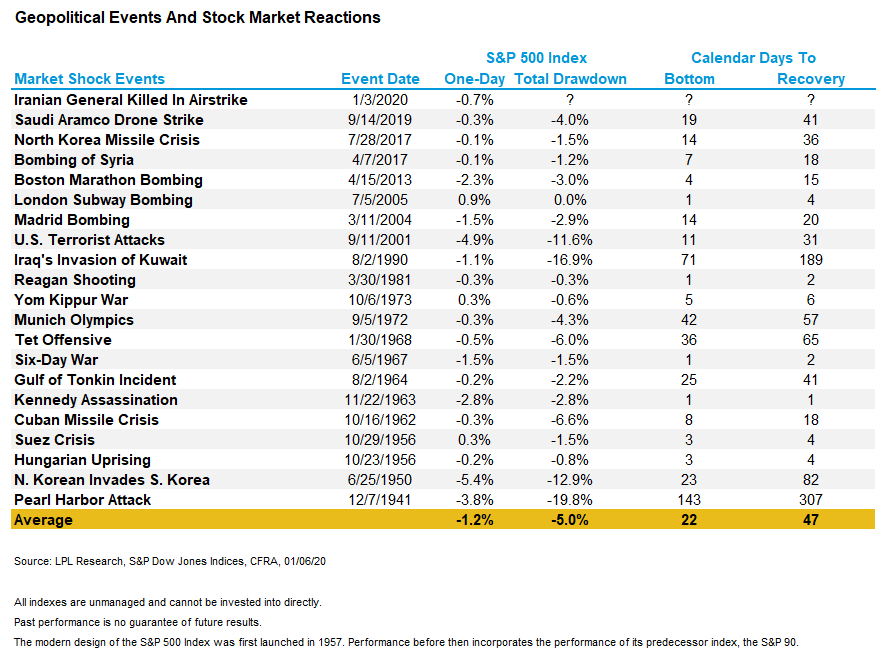 Geopolitical events like these inevitability lead to concern and rightfully so. But we can see, in the context of the stock market and by extension our investment accounts, that geopolitical events are often short lived and have minimal impact on the markets. The average effect of these events is a mere 5% decline in the value of the S&P 500 (a stock index representing this United States’ 500 largest companies), with the market rebounding in less than 2 months.

What does all this mean? If you’re a long-term investor with years left to retire, history tells us that in most cases, this is all just noise and nothing to be overly concerned about. Remember to not lose sight of your financial objectives and why you’re investing in the first place. Make sure to choose an investment strategy that aligns with your personal risk level and stay the course, even in times like these.

However, if you are taking on too much investment risk, which many people are with the market at all-time highs, events like these can serve as a wake-up call that your account needs to be reviewed. When investing we talk about risk tolerance, but what that really boils down to is the “sleep at night” factor. If the twists and turns of the market cause such discomfort that you’re checking your accounts all the time, it might be time to reduce your risk.

International investing involves special risks such as currency fluctuation and political instability and may not be suitable for all investors.

The opinions voiced in this material are for general information only and are not intended to provide specific advice or recommendations for any individual. All performance referenced is historical and is no guarantee of future results.

The economic forecasts set forth in this material may not develop as predicted and there can be no guarantee that strategies promoted will be successful.