A pandemic, in the form of Coronavirus (CoV), can’t come at the worse time for China, as the country starts its Lunar New Year celebrations, and the economy was expected to accelerate on the heels of the new trade deal with the US. The severity of the virus, both in China and across the world, will determine the market reaction and what impact it will have on the economy.

According to the Congressional Budget Office (CBO) assessment in 2006 of the potential hits to the US economy from an avian flu pandemic. The CBO developed two scenarios--one mild and one severe with US-specific attack rates of 25% and 30% and case fatality rates of 0.1% and 2.5%, respectively. The CBO estimated the overall short-term hit to US GDP, in the year in which the pandemic emerged, to be 1 and 2.3 percentage points, respectively. In the case of China, if the shock is more persistent from the virus (CoV or similar virus, SARS -2003), it could affect its GDP by 0.8 percent. This impact is not only to the consequence of the disease itself for the affected people, but to the impact of the disease on the behavior of many people within these economies.

These estimates could be very pessimistic but possible, depending upon how the virus is able to mutate under various conditions the outcomes may vary. 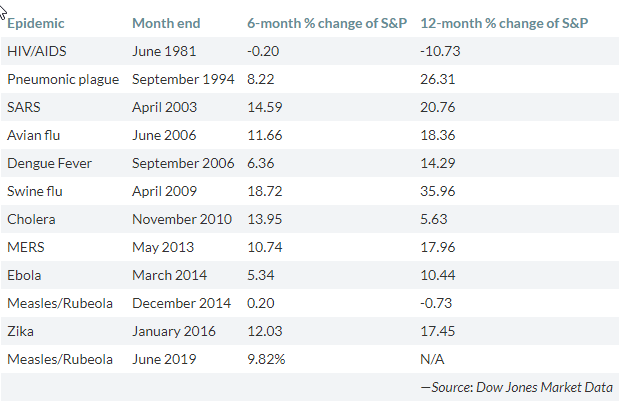 Historically the equity market reaction to such events have been buying opportunities but the severity of the drawdowns could be different. For example, the drawdown at the time of SARS (severe acute respiratory flu) breakout in 2002-03 caused a drawdown of about 16%, whereas the 2014 Ebola crisis caused a drawdown of about 3%. But in most of the cases the equity markets were up significantly after six months and 12 months (see chart).

But after the run equities have had in the last 12 months, wasn’t the correction warranted? Maybe so and we would still see any pullback (10%) (or correction – 20%) as buying opportunity. The overall economic picture for the US still remains solid with the Gallup’ Economic index hitting its highest levels in nearly 20 years. The new homes sales for the month of December declined slightly (-0.4%) and the Dallas Fed manufacturing came in little better than expected.

We will continue to monitor the financial market conditions and keep you abreast of further developments. If you still have further questions about your investments, please feel free to contact your Wealth Advisor at Marshall & Sterling Wealth Management. 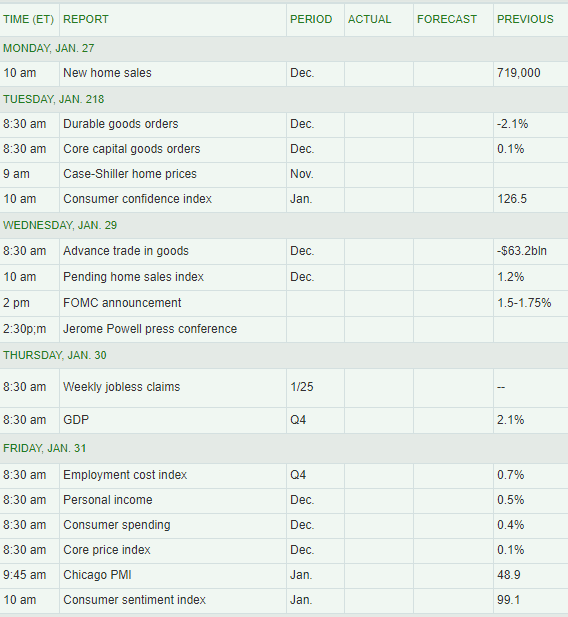 International investing involves special risks such as currency fluctuation and political instability and may not be suitable for all investors.

The opinions voiced in this material are for general information only and are not intended to provide specific advice or recommendations for any individual. All performance referenced is historical and is no guarantee of future results.

The economic forecasts set forth in this material may not develop as predicted and there can be no guarantee that strategies promoted will be successful.